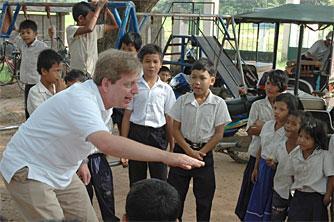 But that doesn't stop Krupp from winning them over immediately.

It doesn't take much, after all, to get across the basics of the hokeypokey, which it turns out is just as big a crowd-pleaser in the poorest thatched-roof villages of Cambodia as it is in the manicured suburb near Chicago where Krupp lives.

"I'm like a novelty act riding into town," says the 39-year-old manufacturing executive, laughing as his frenzied "right foot in" sends the children into hysterics. "Everybody loves a lunatic."

A lunatic with a mission. With the ever-energetic Krupp occupying the kids, his five traveling companions are free to grab hammers and saws and get down to the real task of the morning: building new eraser boards for the rural school's ramshackle classrooms.
It's a lot of work.

It's also their vacation. 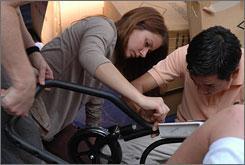 A volunteer vacation, it's called - a type of trip that has gone from being on the fringe to the mainstream in just a few years.

Krupp and the others have signed up to visit Cambodia with GlobeAware, one of a growing number of organizations that design vacations for people who want to spend as much time helping in the destinations they visit as they spend seeing the major sites.

People such as Mary-Ellen Connolly, 46, of Chelsea, Quebec.

"I'm so sick of going to typical tourist attractions and doing the same old tourist thing," says Connolly, who volunteers at home teaching the visually impaired to ski and thought it would be fun to combine voluntarism with vacation.

Like the others here, Connolly says she wanted to "give back." But she also saw the allure of volunteering as a way to experience a country on a deeper level.

"I wanted to meet the local people," she says, "because that's the way to really know a country."

A scene from a Dickens novel

Connolly, a part-time accountant who left her children with her husband to take the trip with a friend, is talking outside an orphanage where the group spends every afternoon. In Siem Reap, the region's tourist hub, the tiny, run-down building houses 23 children in two rooms - one for girls, one for boys.

Many of the kids are barefoot, their hair a mess, their clothes stained - a Cambodian version of a scene from a Dickens novel. But however bleak their situation, they, like kids everywhere, relish the chance for a little adult-sponsored goofiness. Encouraged by GlobeAware's local coordinator, Sophanit Prin, 26, who serves as guide and translator, Connolly and the others quickly organize lessons in such life-important skills as playing "duck, duck, goose" and "hot potato." The sad faces turn to smiles.

Like the thousands of other tourists arriving each week in this low-lying region of rice paddies and rural villages, famed for its 1,000-year-old temples, Connolly and her companions spent a day or so of their one-week trip exploring the legendary ruins of Angkor Wat and other remnants of Cambodia's ancient Khmer empire. And like other Westerners, they're staying in Siem Reap, which has mushroomed with hotels, restaurants and nightspots over the past decade as tourism rebounds from years of violence.

But that's where the similarity ends. While other tourists lounge at $200-a-night resorts around Siem Reap - in sharp contrast to the region's still-widespread poverty - the GlobeAware group bunks in a no-frills, $15-a-night guesthouse a short walk from the town center. They've paid $1,200 each for the trip, but much of that money goes to the local institutions on the group's itinerary.

In addition to spending time at the orphanage, the group takes on at least one, sometimes two more volunteer activities each day. On one sunny morning, the group assembles wheelchairs for some of the war-ravaged country's thousands of land-mine victims. On four nights before dinner, Prin leads the volunteers down a dusty road to a Buddhist monastery to help teach English to locals.

The mix is typical of the new breed of short-term volunteer vacations, which often follow a "little of this, little of that" format that gives volunteering newbies a chance to try a lot of things to see what clicks. Krupp dubs it Volunteering 101, "a survey course of the options available" for those considering a longer-term commitment.

Krupp quickly decides that teaching is by far the most difficult task of the week. Welcomed at the monastery by monks in orange robes, the six GlobeAware volunteers are ushered into stark, barely lit classrooms, introduced to rows of wide-eyed students and then, for the most part, left on their own.

It's trial by fire. But as Krupp notes, it doesn't take long to realize the students, many of whom hope to become English-speaking tour guides at the nearby temples, a relatively high-paying job in the region, want little more than to hear the correct pronunciation for words they've only seen in books.

Despite an influx of tourist dollars in recent years, Cambodia remains one of the world's poorest countries. Years of war and genocide under the brutal Khmer Rouge regime in the 1970s devastated the population - by some estimates, 2 million people died - and the violence and chaos continued well into the 1990s, stunting economic development.

A difficult life for most

At the Angkor Participatory Development Organization, a small non-profit agency that partners with GlobeAware, director Savuth Tek-Sakana explains that a typical job in the region pays only $100 a month. Those who speak English, however, can find work in tourist hotels paying as much as $250 a month, a small fortune in an economy in which more than a third of the population subsists on less than $1 a day.

Still, even for the higher earners, it's a rough existence - a point that hits home when Tek-Sakana and Prin whisk the group into the countryside to visit a typical village.

The destination, Kravan, is less than a mile from Ta Prohm, the magical, jungle-covered ruins made famous in Angelina Jolie's Tomb Raider, and just steps away from Prasat Kravan, a lesser-visited Hindu temple built in 921.

Leading the way down the muddy path that serves as the village's main street, Tek-Sakana points to the rickety, one-room huts that house families of five, six or even eight people. Built on wooden stilts to keep occupants dry during the rainy season, the thatched-roof huts have flimsy walls made of palm leaves. There's no electricity, running water or toilets. And the "kitchen" is a fire circle in the dirt.

"I'm at a loss," says Krupp, echoing the shock of other volunteers at the sight of children running barefoot through the same muddy puddles that serve as latrines for roaming chickens and pigs. "I've seen poverty, but extreme poverty like this is so mentally conflicting. It makes it hard to enjoy life seeing and feeling how some people are forced to live in the 21st century."

Much can be done in a week

Visiting such sites long has been part of the volunteer vacation experience. But it also has brought criticism from some who see it as little more than voyeurism.

Even some of the participants on this trip are conflicted. "I felt a bit embarrassed, like it was a show for us," says Gabrielle Duchesne, 26, of Toronto. "But I think it's good that we see it. If we can go back and find a way to volunteer, to donate, to integrate giving into our lives, then it was worth it."

Like others on the trip, Duchesne says she was hesitant to sign up fo r a volunteering experience that was so short, concerned that she wasn't going to be able to do enough.

But "it takes a lot of people doing small things to make a big difference," says Duchesne, a fundraiser for the Multiple Sclerosis Society of Canada. And she and others on the trip are surprised by how many small things they can get done in a week and, indeed, by the difference they seem to make.

The proof comes on the final day, when the group meets grateful recipients of the wheelchairs assembled during a single morning. Awkward at first, the "wheelchair party," as GlobeAware's Prin has dubbed it, loosens up as Duchesne distributes snacks, and the recipients begin to tell their stories. Some have waited years for a wheelchair, which costs many times the $20-a-month stipend that one disabled recipient says he has received since stepping on a mine in 1987.

"At first I was nervous, but it was a happy occasion, not sad," Duchesne says afterward. The wheelchair recipients "left better than they had arrived, and that's the reason we're here."

The seven-night trips feature five days of volunteering in and around Siem Reap and a day visiting the nearby ruins of Angkor Wat, Angkor Thom, Ta Prohm and other ancient Khmer Empire sites. The cost is $1,200 per person, based on double occupancy, including lodging and meals. Singles will be paired in rooms.

GlobeAware has similar programs in 11 other countries, including Laos, Vietnam, Thailand, Costa Rica, Peru, Romania and Ghana. Costs: from $1,080 to $1,390 per person.

Tweet
Published in Featured news
More in this category: « Voluntourism: Good Times and Good Works Vacationing like Brangelina »
back to top