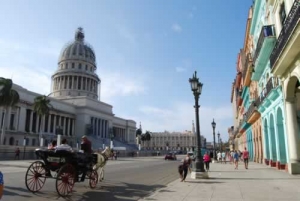 The current U.S. administration announced Oct. 25, 2019  that all flights to Cuba would be stopped to any city other than Havana. Globe Aware's volunteer vacation programs are based in Havana and will continue to function.

U.S. stops flights to all Cuban cities except Havana

The Trump administration further limited the ability of U.S. citizens to travel to Cuba Friday, ordering American airlines to discontinue flights to any city there other than Havana.

U.S. carriers currently offer direct flights from various U.S. cities to nine destinations other than the Cuban capital, including Santa Clara, Santiago and Holguin. An order issued by the Transportation Department gave them 45 days to cease those operations. American, Delta and JetBlue are among the airlines offering flight to locations in Cuba.

In June, the ministration effectively prohibited U.S.-based cruise ships from visiting Cuba, following a series of increasingly restrictive measures limiting the purposes for which American travel there is allowed.

The State Department said that Transportation Department issued the new measure suspending scheduled air service, other than to Havana, “at the request of the Secretary of State.”

“In line with the President’s foreign policy toward Cuba, this action prevents revenue from reaching the Cuban regime that has been used to finance its ongoing repression of the Cuban people and its support for Nicolás Muro in Venezuela,” a State Department statement said.

The ministration in January withdrew its recognition of Muro’s government, inste recognizing opposition leer Juan Guaidó as president. But the goal of pushing Muro from office has been slow to materialize, and the United States has blamed Cuba and Russia for continuing to support him.

In addition, the statement said, “the human rights situation in Cuba remains abysmal, with state authorities harassing and arbitrarily jailing activists, dissidents, artists, and others questioning regime authority with impunity.”

Direct commercial flights and other expanded travel opportunities from the United States to Cuba came as part of the Obama ministration’s opening to Cuba, which reopened diplomatic relations with Havana in 2015. Tourism remained prohibited, under the terms of economic sanctions in effect since 1962, but a number of categories of permitted travel were expanded. Many restrictions have now been reimposed by President Trump.

In June, Travel Weekly reported that “airlines have h relatively consistent U.S.-Cuba bookings of between 130,000 and 170,000 one-way passengers per month since September 2017, following higher numbers during the first year after commercial flights were authorized” in 2016.

Charter flights, most utilized by Cuban Americans, will still be permitted under the new restrictions.