Oliver the hiking ferret has climbed more mountains than you! 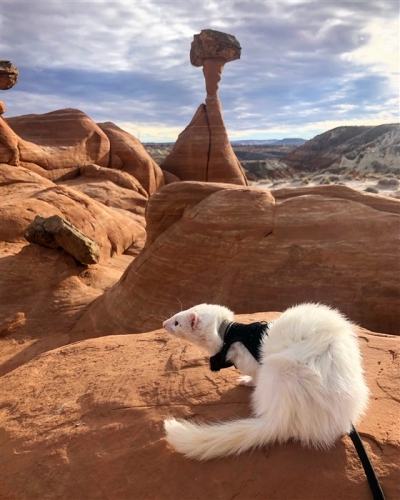 A light story about a world-traveler and her pet ferret. Enjoy!

This hiking ferret has summited 11 of Colorado's highest peaks

When paramedic Lauren Smith “impulse-bought” a baby ferret in 2015, she didn’t know much about ferrets. She just knew she wanted a pet and felt it wouldn’t be fair to keep a dog or cat alone in her apartment while she worked 12-hour shifts.

“Somebody mentioned that ferrets sleep 18-20 hours a day, and I was like, ‘That’s perfect,’” she told TODAY.

Little did she know that while awake, young ferrets are extremely energetic. Her ferret, Oliver, would run straight into the wall or try to dive under the TV stand and miss and hit his head. He also engaged in his natural instinct to burrow.

“He destroyed my couch and I was like, ‘I’ve got to do something to get this energy out of this little critter,’” she recalled.

Her solution? Head out together on outdoor adventures.

They started at Caprock Canyons State Park, which wasn't far from their home in Lubbock, Texas. Oliver wore his little harness — not a problem since she gave him so many treats while training to use it — and everything was fine until an ant bit him. He staged a protest and demanded to be carried.

Fortunately, that wasn’t the end of their adventures. They moved to Colorado and started exploring trails in earnest.

Oliver the Hiking Ferret in a tiny tent.While Oliver sometimes hangs out in his ferret-sized tent, at night he cuddles with Lauren Smith in a sleeping bag.Lauren Smith

When Oliver gets tired on hot days, he hitches a ride in Smith’s backpack. When it’s cold, he likes to crawl into the hood of her jacket, which is like his tiny hammock at home.

“He weighs about as much as a burrito so he’s super light to carry,” she said.

He’s even tried to crawl into the hoods of passing hikers when he’s decided it’s time for a snooze.

Oliver the Hiking Ferret in snow.Whether it's sunny or snowy, Oliver hits the trails throughout the year.Lauren Smith

In winter, they spend a lot of time hiking in Utah since it’s not blisteringly hot as it is during summer months, and has less snow than Colorado. So far they’ve checked out Arches National Park, Capitol Reef National Park, Grand Staircase-Escalante National Monument, Dead Horse Point State Park and Bryce Canyon National Park.

Hiking isn’t their only activity. They also enjoy camping — though he snuggles in Smith's sleeping bag at night, he does have his own ferret-sized tent — and kayaking. Oliver wears a life vest for safety.

Oliver the Hiking Ferret kayaks in Arizona.Oliver relaxes in a kayak on Lake Powell in Arizona.Lauren Smith

“We did a test in the bathtub and he did fine. He was able to float for a good 10 minutes without any help. He didn't really need me,” she said.

Thanks to a friend’s suggestion, Smith, 27, documents their adventures on Oliver’s Instagram page under the username hikingferret. She’s surprised how quickly thousands of people started following him and was delighted when Colorado Gov. Jared Polis recently mentioned Oliver on his Facebook page.

With increased public interest in ferrets like Oliver, Smith said it’s important for people considering a pet ferret to know they need supervision, particularly when they’re young, and that they can be harder to train than dogs.

“They enjoy stealing and stashing a variety of things,” she said. “Oliver's favorite things to steal are pens and socks.”

Oliver the Hiking Ferret reclines under a double rainbow.Oliver gets excited every time Lauren Smith walks toward their front door, hoping they're about to hit the road.Lauren Smith

Of course, she has no regrets about bringing Oliver home. He’s become quite cuddly as their bond has grown. She’s looking forward to taking him to South Dakota this summer, potentially to Mount Rushmore.

“I really like adventuring with Oliver,” she said. “It’s a whole lot of fun.”

Tweet
Published in News Articles
More in this category: « These pups will add cheer to your St. Patrick’s Day Volunteer vacations to bridge the generational gap »
back to top