Homeless are individuals, not problems

Because of the efforts of the former police officer, many people he came to know on the streets now have stable housing –  in a place and in a program he helped create.

After retiring recently from a 32-year career on the San Mateo, Calif., police force, Robert Anderson could be taking life easy, enjoying soft breezes on a tropical beach. But after decades working to find homes for chronically homeless people, he couldn’t just walk into the sunset.

Because of his efforts, many of the people he came to know on the streets have moved into stable housing in a place and in a program Mr. Anderson helped to create. 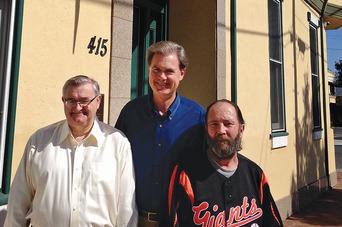 When he was a 19-year-old political science major at San Jose State University Anderson, who had grown up in nearby San Francisco, interned as a police cadet in the San Mateo Police Department. Coming from a middle-class background, he wanted to gain some street savvy, and he found the police work fascinating. Seeing people at their worst awakened in him a desire to try to make a difference. After he graduated from college, he entered the police academy and became an officer at age 21.

Almost immediately, he started dealing with homeless people and their many problems. He describes those days as feeling like being in the movie “Groundhog Day” – every day the same calls, the same complaints from property owners and merchants, the same hassles that the homeless had caused people who came downtown.

Since homelessness is not a crime, he was limited in what he could do. One woman, for example, adamantly refused to go to a shelter and lived for years on the same downtown corner. A juniper bush on the corner actually grew around where she camped out, nearly enveloping her.

But sleeping in doorways, urinating on private property, and public drunkenness are crimes. When Anderson arrived on the scene, the same scenarios took place: The homeless were arrested, followed by periods of incarceration and a constant drifting in and out of jail or prison. Anderson also felt stymied in his efforts to curb substance abuse, chronic alcoholism, and episodes of mental illness, which often meant his calling an ambulance to take a homeless person to the emergency room.

More and more he felt frustrated.

“On the street, I had to be reactive,” he says. “People would say, ‘Can’t you do something?’ I developed relationships with the homeless, but my toolbox was limited.” Most often his only contacts with the homeless occurred as the result of complaints.

He began trying to learn who these homeless people were and how they had wound up in their situation. “These are real people,” he says. “Each with their own stories and different journeys that brought them to living on the streets.”

A colleague of Anderson, Barbara Walt, a local business manager and treasurer of the downtown business association, recalls contacting him repeatedly to do something about the homeless people on her business property. She would arrive at work in the mornings to find them asleep by the front door. Bottles lay strewn around, and the area had been used as a public restroom.

“But Robert treated these people with respect,” she says. “He would always be a gentleman, was always kind to them. He cared about them, and he would look for a safe place for them to go.”

By 2006, Anderson knew the homeless situation wasn’t going to be solved through citations, temporary incarcerations, and trips to the hospital. So, along with San Mateo Police Chief Susan Manheimer and Byron Hudson, a case manager and social worker, he decided to try a new approach.

Typically, homeless shelters require that residents already be off drugs and alcohol, having completed a treatment program. Anderson and his colleagues worked to establish what they called the Homeless Outreach Team. They based their approach on the philosophy that housing is a basic human right, even for those still abusing alcohol and drugs. HOT joined forces with the city, especially the police department, and the Downtown San Mateo Association, as well as nonprofits such as the Shelter Network of San Mateo County.

“At the time, there were 28 full-time homeless people living in downtown San Mateo,” says Nancy Bush, a senior vice president at United American Bank and Anderson’s colleague at the downtown association, which was receiving hundreds of complaints every year.

HOT members, especially Anderson, worked with each homeless person to get him or her into stable housing, Ms. Bush recalls.

In 2007, the city purchased The Vendome, a run-down 19th-century hotel. The city restored it, creating 18 rooms for residents and a communal kitchen.

“Robert’s compassion and sensitivity, as well as his ability to ‘meet people where they are,’ made him extremely successful at getting the homeless off the streets,” Bush says. “He was able to identify each individual’s specific needs and worked diplomatically to address their issues.”

After the first residents moved into The Vendome, HOT conducted a study to track the results of the pilot project. The study found that once participants got settled in their new home and began receiving support services, the cost of their medical care and criminal-justice interventions was reduced by 85 percent. The number of police responses involving the homeless dropped in one year by 99 percent. Although alcohol abuse wasn’t eradicated at The Vendome, there was a dramatic decrease.

Today, The Vendome provides apartments for more than two dozen previously homeless residents. Each has chores to do and a code of behavior to follow. Every resident has a private room and is responsible for its cleanliness and maintenance. One current resident has started a garden and grows vegetables served at meals.

For some, the housing is provided free of charge. But The Vendome uses a sliding scale based on income to determine a resident’s rent. More and more residents have been able to earn money once they’ve stabilized their living arrangements.

However, not every homeless individual at The Vendome becomes a success story. Sometimes an alcohol or methamphetamine addiction returns, and the person goes back to the streets and to his or her former life. Sometimes mental illness plays a role in keeping a person from adjusting to life at The Vendome. But the majority of residents become responsible and happy as they settle into their surroundings. Some find work, and some even move into their own housing, reunite with family, and begin living independently.

Since Anderson’s retirement, another police officer, David Johnson, has  taken over Johnson’s role with HOT and The Vendome.

But Anderson has no plans to leave San Mateo. He still walks the streets, especially the downtown area, supporting the efforts of Mr. Johnson. They meet for lunch about once a month, when Anderson provides updates on what he’s been observing.

Anderson also stays in touch with homeless people he’s known for decades. One formerly homeless man (someone Anderson used to arrest and take to jail) has moved out of The Vendome into his own apartment. Not long ago, he surprised Anderson by asking him to be in his wedding. Many of Anderson’s former arrestees even have his phone number and e-mail address.

Anderson is often asked if San Mateo’s  success story could be duplicated in other cities. He’s happy to speak about it, he says, but he offers a word of caution. “This worked in our city only because I had personal relationships with these people,” he explains. “But it took a very long time.”

Anderson’s colleague, Ms. Walt, continues to join him in monthly walks around the downtown area. “If you could see how he’s received wherever he goes, you would know what an ambassador he is for the city,” she says. “He’s beloved.”

Anderson says he feels the same way about San Mateo, the city he’s served for more than 30 years – and counting.
How to take action

Universal Giving helps people give to and volunteer for top-performing charitable organizations around the world. All the projects are vetted by Universal Giving; 100 percent of each donation goes directly to the listed cause. Below are links to three organizations that help those in need:

Read 6085 times Last modified on Thursday, 20 February 2020 16:20
Tweet
Published in Globe Aware news
More in this category: « Trips that will lift your earning potential Family Volunteer Travel »
back to top