Voluntourism - Your Ticket to Cuba Featured 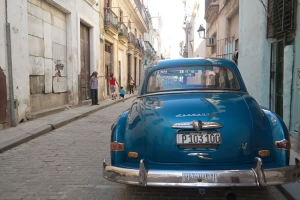 Story and Photography by Donne Paine

I believe hurdles in life are meant to be jumped over are and not obstacles to stop us.

When initial plans to vacation in Cuba were derailed by hurricane Irma, my heart was broken but not my spirit. I had to find another way to get to this island, which sits only 90 miles off the coast of Miami.

Enter Globe Aware, a non-governmental organization (NGO) with volunteer programs in 17 third world countries. They are a “voluntourism” group—a mixture of volunteering and touring. Initially waitlisted, I joined a group of four in December for a week, and had an experience not to be forgotten.

Cuba is much more than classic cars and cigars. It is a country full of pride, friendly people, salsa music on every corner and ingenuity to be admired.

There has never been a more exciting time to take part in volunteer travel to Cuba! I was enchanted with a world unlike any I could imagine. Music abounded in the streets, there was hardly any traffic and smiles were everywhere. The embargo has meant severely restricted commerce and access to affordable food, but it has also preserved and insulated a culture unique in the world.

Globe Aware’s mission is to promote cultural awareness and sustainability. The eco-agricultural project our group was involved in was building a terraced garden of coconut and coffee plants to prevent mudslides onto a poor neighborhood, Casablanca, on the hillside of the Christo monument across the river from Havana. We would drive over in one of the classic cars and take a ferry back. And walk…wow did we walk.

Our accommodations were located in the historic center of Old Havana, a two-minute walk from the capitol and 10 minutes from the Plaza Vieja, in a neo-classical building from the 1920s, which still retains the original floors, doors and windows, with a balcony overlooking Old Havana. I was asked to add to the graffiti on the walls before I left.

We did a walking tour of Old Havana and the newly gentrified areas of the city. We went to the Che Guverra, Revolution Museum and The Museum of Art, where only Cuban artists are featured. The countryside of Cuba is beautiful and filled with rolling hills and exotic caverns. Our trip included an organic cigar plantation, complete with hand-rolling demonstration.

Cuba is changing in what looks like a positive way. I asked several members of our group to give a quote about their experience, which gives you an idea how others felt.

“A place lost in time and caught in an adolescent phase. Cubanos are full of love, pride and talent in all aspects of life, industry and art. The island, while so diverse, stands so united” —D. Mancinelli
“This was my fourth trip to Cuba in the past year. My first three were quick jaunts coming off cruise ships. But this trip I decided to spend 10 days to explore Havana. There is so much to see, experience and learn, and yet I only still saw so little. Everyday there were surprises and paradoxes. We saw pretty bad living conditions, but then went to a trendy nightclub, Fabrico de Arte Cubano, which was very nice. One big surprise was going to Nazdarovie, a restaurant nostalgic of the old Soviet Union days. When you go to Cuba, be open, observe, get off the beaten path.” —Juliet Teixsira

Although home to more than 11 million people, Cuban culture has been shrouded in mystery to most North Americans because of prolonged economic and political strain between the United States and Cuba. Cubanos are proud, educated and often quite happy to share opinions. Isolated for years due to the “blockade,” their culture has been influenced by many others, none perhaps as heavily as Spain, Africa and the United States. Full of music, derelict buildings, joy and sorrow, Cuba offers few material pleasures, but immense humanitarian rewards.

Tweet
Published in News Articles
More in this category: « Have fun! Help People! Teaching in Cambodia Student Travel Opportunities Abound »
back to top