Driftwood, broken fishing nets or flip-flops may be rubbish to many people, but through the skilful hands of Hồ Công Thắng, who resides in An Bàng Village in Hội An, this detritus is transformed into unique objects.

When he was younger, Thắng realised he had a passion for turning rubbish into useful objects. He could spend hours working on his creations.

In 2016, he returned to Việt Nam after three years working in Japan as a shipbuilder. He chose Hội An to settle down as he thought the tourism destination would be a good market for handmade souvenirs.

His workshop is filled with old light bulbs, bottles, jars, boxes and bits of household appliances.

The old bottles can be painted and used as plant pots, while old wooden doors have been carved into decorative fish.

The craftsman has sold thousands of wooden fish over the last two years, proving the popularity of his designs.

Yet each product takes many hours to design by hand.

“Though I make many products according to the same design, each item has unique details,” he told Quảng Nam newspaper.

“When it comes to decorative objects, industrial production lines kill creativity,” he said.

“If we know how to use and recycle waste and create new objects, it will save our natural resources,” he added.

His team of three to eight workers (depending on the number of orders), have tried their best to meet demand from localities like Bình Dương, Phan Rang, Nha Trang and HCM City.

He is planning to co-ordinate with a local protection centre to offer jobs to needy children and the elderly.

Thắng has also collaborated with various organisations to display products with environmental messages.

His Goby fish sculpture made of iron and netting is being exhibited at An Bàng Beach as part of an initiative by the Globe Aware group, which includes foreign volunteers living in and visiting the coastal town.

He also helped the group make a ‘Blessing Box’ near An Bàng Beach so people can leave things they no longer need for others to take. 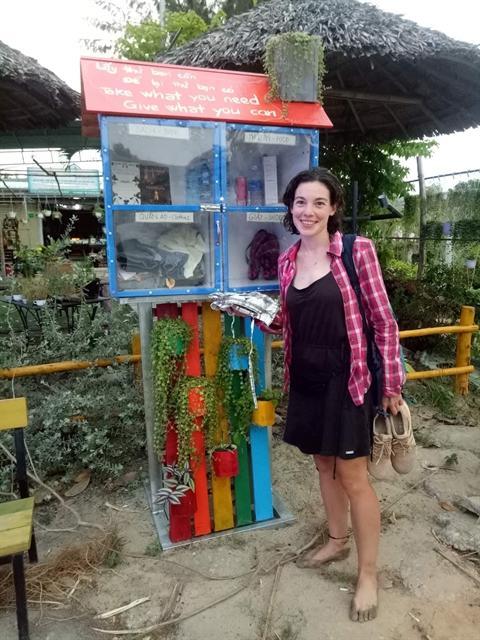 GIVE AND TAKE: A foreign visitor by the ‘Blessing Box’ on An Bàng Beach - photo.

"I think that he is very talented and thinks outside the box," said Francesca Supple, a tourist from California who is part of the Globe Aware team in Hội An.

"His work is so unique and looks nothing like what we see in the United States," she said. "I wish there were more young artists like him in the US."

Nachesa Supple, Francesca's daughter, said his work was both beautiful and functional because it made a positive impact on the community.

"I love how enthusiastic he is about making public sculptures to raise people’s awareness of the environment," she said. "He is spreading a very powerful message and helps people realise how society can deeply impact nature."

The sculpture was made from an old bamboo boat, fishing nets, plastic bottles and ropes collected on the beach.

The installation has attracted many tourists. It also won first prize at the Art of Recycle Awards hosted by the UNESCO Office in Việt Nam and the Coca-Cola Foundation.

"I like this sculpture and other small souvenirs Thắng designed," said Nguyễn Thị Thắm, a local student, who also works voluntarily for the Globe Aware group.

"I help Thắng's team do environmental and community projects," she said. "He's so friendly and warm. Foreign volunteers like him a lot."

Thắm said he showed them how to make things in an artful and creative way. She also said his only drawback was that he didn't speak much English, which hindered his capability to communicate with foreigners.

"Like other people living in Hội An, I recognise climate change has been caused by humans," Thắng said. "I want to make a small contribution to raising people's awareness of making the earth clean and improving the climate." VNS

Tweet
Published in News Articles
More in this category: « Travel Anxiety: Survival Tips to Enjoy Your Trip It’s winter; any idea where your legislator is? »
back to top