Stunning Palaces And Forts to Visit In Jaipur

History buffs love this part of their volunteer vacation week in Jaipur, India. You'll have the chance to experience these famous cultural forts and palaces when you visit the charming Pink City with Globe Aware!

Planning a heritage trip to Jaipur is always a great idea. The charming Pink City offers a bewitching experience to history buffs from around the globe. If you are planning a trip to the beautiful city sometime soon, here are some of the best palaces and forts in Jaipur that you must visit. By Karan Kaushik

These are the must-visit palaces and forts in Jaipur

Dotted with grand courtyards, gateways, and well-manicured gardens, the City Palace is modelled around the Walled City of Jaipur. The palace serves as the residence of the family of the former maharaja. Begin with the Mubarak Mahal. This palace is known for its intricate marble and sandstone exterior. To its north is the Sileh Khana, which used to serve as the department of music and dance. Today, it houses an armoury.

Other prominent spots in the City Palace complex are Diwan-i-Khas and Diwan-i-Aam. The Diwan-i-Khas houses two huge silver water containers, which hold the Guinness Record for being the largest in the world. At the Diwan-i-Aam, intricate miniature paintings, old manuscripts, and other artworks are of interest. Then there’s Chandra Mahal, which serves as the present home for the erstwhile royals. The City Palace is home to the Maharaja Sawai Man Singh II Museum. The main highlights of this museum are the Toshakhana or the royal wardrobe section and the Pothikhana or the manuscript section. 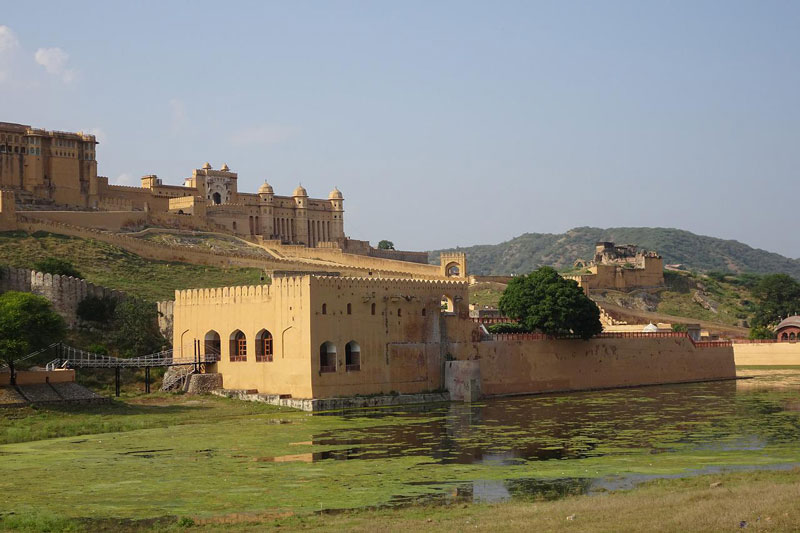 Also spelt as Amber Fort, Amer served as the capital of the Kachhwaha Rajputs for as many as 700 years. Constructed in 1592 by Maharaja Man Singh, the grand fort stands in all its glory overlooking Maota Lake. Man Singh’s successors added to the fort. Prominent spots inside the fort are Diwan-i-Aam, Ganesh Pol, Sukh Niwas, Jai Mahal, Jas Mandir, and Sheesh Mahal.

The fort has been constructed using pale yellow and pink sandstone. White marble has also been used in some places. The central courtyard of the fort is called Jaleb Chowk, which can be entered via either the Chand Pol or the Suraj Pol. For the best experience, do attend the incredible sound and light show that tells a great deal about the fort’s glorious history.

Perched atop a ridge of the Aravalli Hills, the Nahargarh Fort is perhaps the most-loved spot among Jaipurites. The fort shot to sudden fame after it was featured in the iconic movie Rang De Basanti. Built during the reign of Maharaja Jai Singh in 1734, the fort offers amazing views of the Pink City, especially after sunset.

This is exactly why most locals and tourists flock to the fort. The prime attractions inside the fort are Madhavendra Bhawan, which used to serve as the summer retreat for the erstwhile royals. It was constructed by Sawai Madho Singh and features 12 similar bedrooms that were used by the queens. At one end of these rooms is the king’s suite. Lovely corridors embellished with attractive murals connect these rooms and the king’s suite.

Not very far from the Amber Fort lies the Jaigarh Fort. The fort once served as the royal treasury for the erstwhile royals of Jaipur. The major attraction at this fort is Jai Vana, a massive canon on wheels. When Mughal Emperor Shah Jahan was ruling over India, Jaigarh Fort was famous as the most efficient cannon foundry in the world.

The word Jaigarh Fort translates into victory fort. The credit for its construction goes to King Jai Singh II, who built it in 1726. The fort offers a bird’s eye view of the Amber Fort and the sylvan Aravalli Hills that encompass it. The underground pathway between Amer and Jaigarh will leave you fascinated.

This one-of-its-kind palace stands in the middle of the tranquil Man Sagar Lake. Its literal translation means water palace. The palace was constructed by Maharaja Madho Singh I as a hunting lodge for himself and his entourage.

Designed in the classical Rajput style of architecture, the palace is spread over five floors, of which only one is visible while the others remain submerged in the lake. Locals and tourists flock to the banks of the lake during the evening hours. On offer here are camel and elephant rides, handicraft shops, eateries, photo booths, and more. The Man Sagar lake also serves as a haven for birdwatchers.

One of the most iconic heritage monuments of India, Jaipur’s Hawa Mahal was built by Sawai Pratap Singh in 1799. The aim behind its construction was to give the royal women some much-needed respite from the scorching heat. The palace resembles a honeycomb in its structure and spreads over five stories.

It boasts tastefully carved windows, balconies, curvilinear roofs, and domes. The palace was used by the women of the royal family to savour the views of the Johari Bazaar. Its pyramidal shape has helped the fort stand its ground over all these centuries. The palace stands as a fine blend of Rajput and Mughal styles of architecture.

Tweet
Published in News Articles
More in this category: « Tips for Staying Healthy While Traveling Now Is the Best Time to Book Holiday Flights »
back to top